A Monster Calls (if only!) 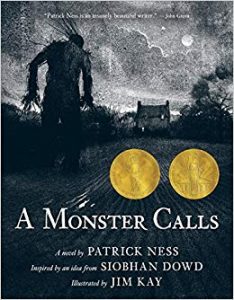 My book club read A Monster Calls by Patrick Ness.

I understand that this book has been made into a movie.  Pro tip: if you want me to remain totally ignorant about something, just make it into a movie.  Anyway, I had never heard of it and came to it with a clean slate.

I still can’t figure out what the monster’s stories were meant to indicate, or how the first two tied in with the boy’s situation, but overall this book was an easy read.  It probably just wasn’t aimed at me, I thought.  After all, I could guess what his dream was about from the first moment it was mentioned; this book was probably meant for people who either couldn’t or wouldn’t leap to that conclusion.

Thing is, though, the more days that have gone by since we discussed the book, the more I’ve been feeling maybe it was aimed at me.  Because (trying mightily to avoid spoilers, but why bother? Anybody who reads this blog will also jump to the correct conclusion within the first three pages of the book) once you step away from the specific issue in the book, the bigger problem of crap nobody will tell you about fills up all our lives.

Somebody resigned but nobody can tell you why because confidentiality.  This local business is unionizing, but nobody will confirm the reason because negotiations. That other one may be going under, but for them to admit that would be a self-fulfilling prophesy.  If negotiations go badly, this world leader will do thus and such — unless they’re just bluffing.  All the candidates agree on this policy, until they pivot after the primaries. 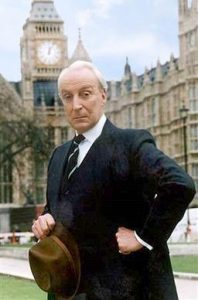 “You might say so, but I couldn’t possibly comment.” Ian Richardson as Francis Urquhart; image from Wikimedia.

The more you look around, the more you see that you are surrounded, totally surrounded, by lies and secrets and things people aren’t allowed to say, think it’s unproductive to admit, believe you would react poorly to, are kindly protecting you from (and to be fair, even when they do cut the crap, you have trouble understanding or believing it.  Because communication is not all that, folks.  Your own brain does all that stuff to you, as well.)

I have a low, low tolerance for this sort of bullshit, even when I can see that it’s unavoidable.  That’s why I went into biology. In fact, it’s why I went into ichthyology.  I remember thinking to myself, some fifty years ago, that it would have to be either fish or insects because the higher vertebrates were too likely to lie to me.  And humans, well they were out of the question entirely.  There was no truth in them, including me.  You might as well just make stuff up for yourself as try to build on what humans told you.

By and large I still feel that way.  That’s why I divide a lot of my time between biology and making stuff up for myself.  Because if you let yourself get too invested in what people can or can’t, will or won’t tell you, pretty soon all you want is for it to be over already.

I guess that book really was for me, after all.

Nobody’s Ally
It’s Just Too Hard to Learn, I Guess
The Secret Life of Flies by Erica McAlister
Why I am not Burned Out on Writing
This entry was posted in reading, real life, Uncategorized. Bookmark the permalink.