Yes, I’m one of those people who ignore climate change articles 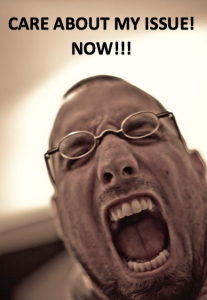 image modified from Crosa via wikimedia. Used under a Creative Commons license.

I read an article this morning about why people ignore climate change articles, no matter how horrific the predictions are.

I’m a big-time climate change article ignorer, even though I’m not skeptical about its existence at all, so I thought I could offer an explanation.  Of course we ignore those scary articles!  Becoming emotionally invested in something you cannot affect is a recipe for hopeless misery, and people who ask you to do it are not your friends.

If the people writing these scare pieces presented effective ways for us to make a difference, lots of us would be eager to cooperate. Instead, their idea too often seems to be to get the rest of us upset enough to do things — like devoting ourselves to political activism, or coming up with solutions — that they aren’t willing to do themselves. That means they are speaking from a position of helplessness to start with. What other message will their articles be able to convey?

Somebody once told me, ‘people won’t follow you because they don’t want to end up where you are,’ and that advice was never more relevant than when looking at these articles.  The last place I want to be is so upset about a looming catastrophe that I have to sit on my butt behind a computer trying to convince other people to devote their lives to fixing it.  (Plus, having an academic job in the current climate means I’m paid to endure that situation at work, so why would I do it for free in my spare time?)

In the latest scare article, Wallace-Wells says ‘What creates more sense of urgency than fear?’  The answer is, hope.  One Green New Deal proposal outweighs a thousand scare articles in motivating people to care about the issue. When you are actually doing something about an issue, rather than just trying to motivate other people to do something, you have this kind of hope to offer, and people are eager to sign on.