Shaking my Cane at Google, etc. 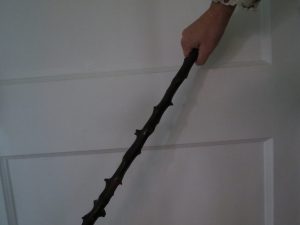 My father’s blackthorn cane. It has knobs on.

When I first began, we had a method for scheduling these which consisted of panicked announcements from the chair right before the (usually weekend-scheduled) event, followed by some untenured keener or over-responsible elder stepping up, or by the chair doing it themself. A trail of guilt, self-justification, and resentment dragged after this process.

So when I became chair, I instituted a highly sophisticated method of assigning these, based on years spent studying the relevant psychological literature (not). We listed all these events, with their dates and the number of people needed, on a sheet of paper and passed it around at the first division meeting of the year. Everybody signed up for their share and put their responsibilities into their calendars1. After the meeting, the division secretary sent the information on the list to the various offices that needed to know who was staffing their events.

This may have been my major contribution as division chair.

So why did I receive three frantic emails in the past week about events that needed staffing, and find that our current division chair is picking one of them up at the last minute? Two words: .(Correction; it is some other platform designed for volunteer sign-ups)

The departments that run these events have decided it would be so much more efficient, instead of getting information from our secretary (who no longer exists) to theirs (who probably no longer exists either), to put all the signups on google docs, etc.2, 3, 4. No longer do we pass around a sheet of paper with dates we can compare to our calendars, and sign it in full view of our colleagues; now we are asked to individually, at our own convenience, log into a separate page for each event and volunteer (or not) in the privacy of our own offices.

Well, would you? Would you take time out from what you’re doing to open a document and fill out a form in order to volunteer for something you don’t really want to do?

Yeh, I didn’t either. So I was just as much to blame as anybody for the spate of panicked emails this week. Though I saved my butt by being available for a last-minute fill-in, which turned out not to need me after all. So I’m golden, and it’s the rest of you sluggards who are on the hook.

At our next division meeting, I will have a sheet of duties to pass around. And if anybody asks me why, I will shake my cane at them.

1. I’m glad to report that the Royal Academy still uses the paper method for scheduling this stuff. That’s what starts all the trouble in Kindling.

2. However, I probably have to create an equivalent of google docs for the Academy, just to keep my work up to date. Of course a demon will be involved. I maintain that a demon already is involved,.

3. I had my computer exorcised. True story. For another post.

4. I am totally going to write an Osyth story in which firing the secretary lets the demons in.

We Have to Keep the Program Going, Right?
Nobody’s Ally
A Monster Calls (if only!)
Yes, I’m one of those people who ignore clim...
This entry was posted in Uncategorized. Bookmark the permalink.