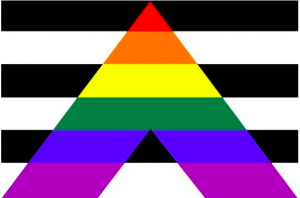 I’m nobody’s ally.  Colleagues have stickers on their doors proclaiming that they are allies of this and that, but all I post is a sign-up calendar and (in winter) a notice proclaiming it to be the coldest office on campus.

It’s because I don’t know what the term ‘ally’ will mean to students.  What will they expect to find inside an office labeled ‘ally?’

When I look the term up, I find a lot of stuff about keeping quiet and listening and then using your position of privilege to signal-boost the message you’ve listened to.  I’m fine with listening, but I will not uncritically signal-boost other people’s opinions, or support and promote actions I have questions about. Which, I think, would make me a nuisance rather than an ally.

I also find suggestions that allies should be more or less educated in the cause they’ve allied themselves with, its priorities and social conventions. By this criterion, I don’t even count as an ally to my own demographic.

Some of my colleagues define it as providing a safe space in which to discuss the topic, and a sympathetic, respectful listener.  I can imagine, for instance, a student looking at my colleague’s door and knowing that this is an office in which same-sex relationship issues or DACA status or mental illness can be brought up without having to rephrase them to conceal the details.  Without having to first ask oneself, Will this prof be cool with it, or be a jerk about it?  Am I making a huge mistake?

I’d like students – especially students with the most insecurities, the most at risk – to know that about me, without having to go to the trouble of watching and wondering and making inferences, and without any feeling that they’re taking a leap of faith when they first bring the issue up. I wish there were a word that meant unambiguously that.  But it’s a tall order to want a word that will mean ‘uncritically sympathetic with your situation, but not to be counted on for uncritical support of anything else.’

Perhaps I should just post a paragraph on my door. Or perhaps we shouldn’t ever need to post that message on any doors, because it should be the bare minimum students are entitled to expect in every office on campus.

Though it comes at the issue from a different angle, I’d be remiss if I didn’t post a link to this fantastic article on allyship from The Unit of Caring.

Ferocious Critques ‘r Us
We Have to Keep the Program Going, Right?
My Wish was Granted
When do we get to talk in private?
This entry was posted in academic happenings, life around campus, real life, Uncategorized. Bookmark the permalink.