The Secret Life of Flies by Erica McAlister 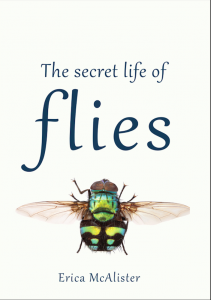 Before there were robotics nerds or computer nerds or science-fiction nerds there were natural history nerds, and this book is for them. It’s that modern rarity, a popular science book that might have been written in 1940; the most advanced technology described in it is the ‘pooter,’ an apparatus for catching flies based on your own power of inhalation. This places it squarely in the grand old tradition of British natural history books, of which I have read and enjoyed many, and I very happily read and enjoyed this one.

Like all genres, the British natural history book has its conventions and its challenges for the n00b. Readers who have not taken a course in systematics may boggle at the initial rundown of fly classification, and those who cannot keep track of characters in Russian novels will not be able to keep track of characters with names like Prochyliza and Ephydra either. Fear not; there is no reason for you to remember any of the names or who loves (or parasitizes) whom. This is a book of amusing anecdata, all people (or flies) and no plot, as another of my favorite books is subtitled.*

Not entirely accurate, because all these books have a sort of plot – or if not an actual plot, an agenda, which is to make you marvel at the wonders of nature and look at actual flies, when next they present themselves to you, with more appreciation. The next time a house fly lands on your plate, you may remember the maggotaurium before you swat, and resolve to google fly-based treatments for MRSA. Those lumps on the goldenrod stems will mean more to you. You will become an even more irritating nerd about Jurassic Park’s lapses in accuracy, and use ‘problematic’ in phrases like ‘The attractive but problematic medfly.’

Some of the most interesting snippets in this book involve the introduction of predatory flies to control introduced agricultural pests. These stories are presented as unalloyed successes, which always rouses my suspicion and makes me open a search engine… and, in this case, find that not only were there no adverse consequences reported but that some of these biological control methods have become standard, deployed even in such sensitive and carefully monitored regions as the Galapagos.** It was refreshing to be reminded that commercially significant scientific advances once, and still, could depend on people sitting on the ground watching the behavior of insects.

If you’re the kind of nerd who delights in knowing about the largest fly, the luminescent fly and its toxic web, zombees, and the reason to iron your line-dried clothes in East Africa, this book will give you great satisfaction. If, like me, you think something vital is being lost as biology becomes all about test tubes and sequencing, this book will reassure you – not only because of its mere existence, but because of the many studies dating from 2010 and onwards which it mentions, reminding those of us who need such reminders that taxonomy, animal behavior, and the sheer wonder that brought us into biology are still alive and well – at least in the UK, with its apparent horde of amateur dipterists, and in Erica McAlister’s section of the museum.

Obligatory self-promotion: my own museum (and holiday) story, Kindling, is only 0.99 at Amazon. The Natural Magic Museum has no flies as of yet, but it does have a dragon in the sub-basement. If you want it in dead-tree form, buy the collection Want’s Master and Other Stories from Osyth  for just $5.99.

*That would be Tumbledown Dick by Howard Spring, which has nothing whatever to do with this review but which I will puff on any pretext.

** Though they ended up going with the beetle version of scale insect control, as the flies worked better in cool climates. (Hoddle, M. (n.d.) Biological Control of Icerya purchasi with Rodolia cardinalis in the Galapagos. UCRiverside, Applied Biological Control Research)

A Monster Calls (if only!)
Politics needs the Cladistic Revolution
Dr. Mutter’s Marvels
‘So You’ve Been Publicly Shamed’...
This entry was posted in From the museum, reading, real life. Bookmark the permalink.