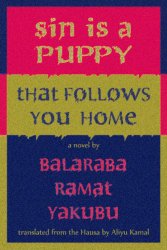 I just read what’s supposed to be the first book translated from the Hausa into English: Sin is a Puppy That Follows You Home by Balaraba Ramat Yakubu.

CORRECTION: Carmen McCain, author of the articles I linked to below, tells me that there have been several other Hausa novels translated – though this one may be the first one by a woman to be translated into English.

Marked you not how retribution, like a poisèd hawk, came swooping down upon the wrongdoer? Oh, it was splendid! (W.S. Gilbert, Patience)

The real thrill though, wasn’t what seemed familiar but what was completely new to me. In this novel, a man who wants to marry an additional wife brings the current senior wife a bag of gifts and makes the announcement. If he decides to divorce one of his wives, he simply gives her a letter with his declaration written three times in it. There are no legal battles over child custody; the bad husband tells his wife to take their nine children away with her, while the good one brings his divorced wife’s children back to his house one at a time, giving them to the current wife to raise.

Then, the things the characters had to pay for or not pay for. I recognized the divorced wife’s need to stay in her children’s school district, and sympathized with her selling off possessions to pay for the older childrens’ boarding schools. But when she told her eldest son to attend University because it wouldn’t cost anything, I did a double-take. Free higher education! And when the bad husband ends up in hospital, there’s no mention of who will pay his bill but much discussion of who is bringing him his meals. I recognized this from a visit to a hospital in Tanzania, but had not known a similar system applied in Nigeria.

Marriage negotiations amazed me. The book follows a good marriage through the lovers’ first sight of one another on the street, the proposal at his first visit to her house, the formal visits from female relatives (during which the bride-to-be stays modestly hidden in another room), negotiations and gifts, the furnishing of the wife’s room. All of it new and fascinating to me, but obviously routine to the author and her target audience.

What I liked most about this book is that it did not cater to me at all. It was not written for Western eyes. For maybe an hour I was in a world where the opinions of people from my country simply didn’t exist, being given moral advice that went contrary to many of my assumptions and values. This is just the kind of challenge I want from literature!

So how much of what I think I picked up about Nigerian culture from this book is accurate? I have no way of knowing. But the book is itself a part of Nigerian culture, and I picked it up… I can say no more, except that I wish more books from this gigantic body of literature had been translated into English, and I will be watching for them!

Here’s an article about the author’s life and work

Here’s one about the Hausa-language literary tradition from the 1300s to the contemporary littatafan soyayya novels (of which this book is an example).

Ghost Drum by Susan Price
Night Calls by Katharine Eliska Kimbriel
Review: Too Like The Lightning by Ada Palmer
Turn your child into a marine biology fanatic
This entry was posted in book review. Bookmark the permalink.