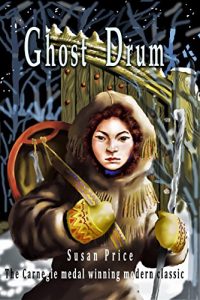 I would say it’s rare for me to read the first in a series and then go immediately and buy the rest of the series, but it’s not. However, that won’t keep me from saying good things about Ghost Drum! Shout-out to James Nicoll, whose series of posts about 1970s women SFF writers clued me in to this series.

I’m a fan of the fairy-tale voice in fantasy. That is, I like a fantasy that stands its ground, that doesn’t explain its characters and their motivations in the current vernacular, that requires me to step into its world rather than shoe-horning itself into mine. Else what’s the point of fantasy? So this book, with its story told by a talking cat, was just to my taste from the very first sentence. A cat, after all, has a rather remote view of people and their inner lives.

While this is a straight-out fairy tale, full of shamans with walking huts, ghosts, ice-apples, shape-changing and magic of all sorts, it’s also full of cold winter nights and even colder hearts. People are killed and mistreated a lot in this story, and folks attracted by the smooth, clear prose and the fairy-tale feel may be shocked by that. I was! The cat telling the story doesn’t care about such things, though. Its voice is the voice of reportage, which keeps a distance between us and the suffering.

Coincidentally, my book club read and greatly enjoyed another fantasy set in Russia this past year – The Bear and the Nightingale by Katherine Arden. What struck me most about that book was the conflict between christianity and the villagers’ folk religion, and the main character’s fascinating relationship with the nature around her. None of that shows up in Ghost Drum, though they share many details of setting.  Ghost Drum drew a great deal more on Sami (then called Lapp) culture for the magic of its shamans, but there was not a touch of folk religion in it — no arcane creatures or woodland spirits, though the main character had one very interesting interaction with the animals of the woods.  Its story of czars and czarinas, palaces and chicken-legged huts, felt more like a chapter from the Arabian Nights.

The biggest difference, however, is that Ghost Drum is not a coming-of-age-story. Children grow up in their sleep in Ghost Drum. The book is not at all interested in how they decide what they are going to be; in fact, nobody in this culture gets to decide that. Babies’ fates are chosen for them before they are old enough to squeak. Nobody in Ghost Drum, except the mother in the first chapter, has any chance to question or rebel. Ironically, that makes society’s strictures a smaller plot point in Ghost Drum than they are in The Bear and the Nightingale.

Is that unrealistic? Certainly, though perhaps not as much as I would wish. But the cat narrator of Ghost Drum does not care. All that maturing and thinking and feeling and judging and trying to decide where one fits into one’s culture would get in the way of the story, the cat seems to think, and I can’t argue. The story itself rips along, a seamless carpet of wonders carrying us through a new but familiar-feeling magical world, and — as I am wont to do — I’ve already purchased all the sequels.

Night Calls by Katharine Eliska Kimbriel
Review: Too Like The Lightning by Ada Palmer
Sin is a Puppy That Follows You Home – a mod...
Turn your child into a marine biology fanatic
This entry was posted in book review. Bookmark the permalink.