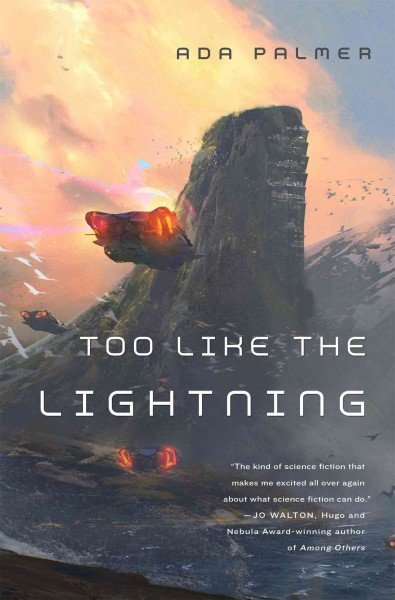 How can you go wrong with a book that has been officially permitted by six governmental agencies, certified nonproselytory, and has a page full of detailed trigger warnings for sex, violence, discussion of religion, and opinions likely to cause offense?

Too Like The Lightning isn’t a book set in the future or a book about the future, but a book from the future – and what a clever conceit it is!  This is the cleverest book I’ve read in ages.  I honestly can’t tell the author’s positions on any of the topics she addresses in it; in fact, I can’t figure out the narrator’s positions on most of them – though that may be because this is just the first volume, so BE WARNED, it ends right in the middle.

The middle of what? is the question.  Or rather, if it’s the question you might be frustrated by this book – because for this book, being in the middle is the whole point. Don’t pick it up if you want a clear quest carried out by a relatable protagonist with virtuous motives; if you want identifiable heroes and villains; if you want anything that fits into your current thinking.  Because this is a book from the future, and its point is to drop you into the middle of that future — a future clearly grown out of our current preoccupations, serving as an ambiguous commentary on them for those who wish to take it that way, but really its own thing whether you like it or not.

In short, this is a worldbuilding book.  But saying that minimizes it, because this isn’t one of those books that reruns themes from history in a postapocalyptic *yawn*, or one of those books that creates a new culture from mediaeval *yawn*, or a book which incorporates the most exotic, incomprehensible traditions from other *yawn*. This is a book populated by people who’ve consciously built every detail of their culture on first principles, who care nothing for tradition, who read Voltaire and would find current postmodern discourse amusing if primitive.

Imagine a world where …

All seen through the eyes of one of those convicted criminals, a man who may be shoveling out a sewer one minute and called away to advise a head of state the next. Because Mycroft Canner is no ordinary person, no ordinary criminal, and his problems are no ordinary problems — especially the child he’s trying to protect (or does he really do protection?) in between hopping from continent to continent to deal with his noble masters’ flurry about the yearly ten-best lists, on which they may or may not appear, and about which they seem to care way, way too much.

Those lists are the weak point of the plot, for me. Why does anybody care? I certainly don’t, but that just allows me to ignore them in favor of pondering the worldbuilding and admiring how well the author jerks me around. Are all those permissions and trigger warnings on the first page satire, or are they demonstrating that this would be a good thing? How about Mycroft’s use of gendered pronouns, with which the reader argues occasionally? Do they demonstrate that gendered pronouns can really be done away with, that they should be done away with, that they leave a vacuum into which gender stereotypes will slip, would we or not, that Mycroft is messed up?  And what about slavery? Is Mycroft getting a good deal, or a raw deal?

In the last third of the book (just about the point I was saying to myself Oh CRAP, this thing is moving too slowly to wind up in one volume) the book begins to live up to those trigger warnings, so don’t skip over them.  But that in itself is a game-changer, throwing everything you’ve begin to assume about this culture and the characters into a cocked hat – which somebody is sure to be wearing, in this Enlightenment-worshipping future. And by the time it ended, all I wanted was the second volume.

It’s been three weeks since I finished this book, and I still haven’t a clue what the author thinks about anything.  I couldn’t be more satisfied.

Turn your child into a marine biology fanatic
Dr. Mutter’s Marvels
‘So You’ve Been Publicly Shamed’...
The Martian is just the right mix
This entry was posted in book review, reading. Bookmark the permalink.