Acts and Omissions by Catherine Fox 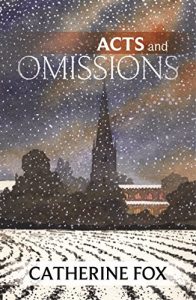 If Susan Howatch and Miss Read wrote a book together, it would probably be like this. Take the sorts of problems Howatch’s clergy face, and the same level of Close inside baseball, and cross it with short-chapter English countryside cozy, and here you have it… so cozy, in fact, that at first I wasn’t sure the author had a plot in mind rather than a sweet, meandering ‘Year In…’

But Acts and Omissions has a plot with plenty of surprises in it, though some of the entanglements its characters fell into were predictable and I never did figure out why everybody loved Freddie, who I found terribly tiresome.  Obviously people needed to help Freddie, and they were all professional christians so I could see why they would stiffen the upper lip and do it, but why did so many of them love him? Well, he will apparently be back in the next volume and I may figure it out then.

The characters I did love were Archdeacon Voldemort, Professor Jane, and Bishop Bob.  How can you not admire a professor who, when almost hit by a car on a one-way street, kicks in its door?  Or a courtship carried on by hostile gifs and youtube links? Then there are Father Wendy and Father Dominic, who I am so afraid the author intends to entangle in Freddie’s snares in the second volume.

I’m a big fan of Authorial Voice, and this is a gold mine for Voice junkies.  Fox doesn’t use Omniscient so much as Capricious. She sets up arbitrary rules for the story and comments on them every time they constrain the narrative and/or are ignored because they constrain the narrative.  She denies or reaffirms readers’ apparent expectations about the plot, and stops the action when it becomes obvious that we need another lecture in Anglican 101. Nor does she fail to tell us everything we need to know about the characters, bit or otherwise, as they pop up.  Reading something like this, after a long long era of tight third or first-person, is like taking your shoes off and stretching out on the couch.

So once again, I’ve bought the rest of the series. At extremely reasonable kindle prices.

A Monster Calls (if only!)
A Philistine Reads About Art
The Secret Life of Flies by Erica McAlister
Escaping from YA
This entry was posted in reading. Bookmark the permalink.