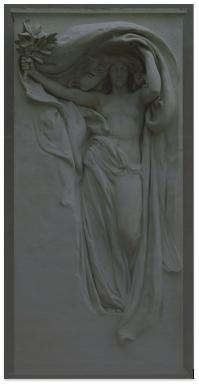 Mourning Victory by Daniel Chester French, modified from the Metropolitan Museum of Art via Wikimedia Commons

This can be really frustrating, and I’ve often envied people who outline their story and dictate whole chapters in the car while driving across Death Valley, or so forth. My method obviously isn’t going to lead to a big-ass career as a popular writer, and for a while that realization led me to try other methods. But they simply don’t work for me, and I’ve come to realize that I don’t write in order to have a successful writing career but to explore – and discover – my own stories. Thank goodness I have a day job that I love!

One kind of excitement that pantsers like myself get that doesn’t appear in the blogs of more disciplined professional writers is the moment when the story comes to life. Sometimes I only have to write ten words before it happens, and other times it takes ten or twenty chapters. It doesn’t mean the story will be any easier to finish, but it means that being in the story has become part of being in the world, rather than a project I need to complete. I’ve found its central image, the one that ties into my own life and that I would be exploring anyway even if I weren’t writing a story about it.

Sometimes I write that image long before I recognize that it’s central or that it
matters. That’s what happened in the current Osyth novel, which I wrote ten chapters of last summer and then set aside because it hadn’t yet come to life. Going back to it, I discovered that the central character, who I thought was dealing with one sort of thing, is actually dealing with a different sort of thing entirely, and one I’m excited to be working on.

A Philistine Reads About Art
Why I am not Burned Out on Writing
In Which I Write Vaporware
I Amn’t Dead (Writing-wise)
This entry was posted in writing. Bookmark the permalink.