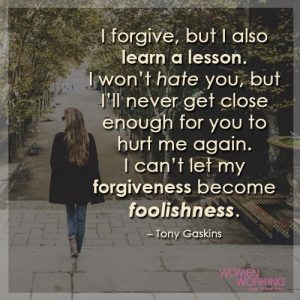 This is fake forgiveness. I mean, if someone said that to you, would you consider yourself forgiven?

At one time I was as anxious as anybody else to be told that this was all forgiveness required of me. But what a rip-off! I kept achieving this kind of fake forgiveness and wondering why it didn’t make me feel any better or behave any differently.

The fact was, all I wanted at that time was the label of forgiveness. I had, in a weird way, accepted both that it was a good thing to have, that it was a magic label that would somehow make things stop hurting, and that it didn’t really exist  – an attitude that I probably hold toward a lot of the virtues society makes a big deal of. I didn’t realize what forgiveness actually was, or that it was even a real thing, until long after I had experienced it.

Now I can look back and spot the times when I’ve practiced real forgiveness. There aren’t many, because I live a life pretty free of offenses, but I can say from experience that it is pretty grand. When I can manage it, it makes an offense against me feel insignificant – like failing at a task when your attention is already on the next step. When I truly can forgive someone, it’s because interacting with them is just one part of my big, big life. I don’t care what the offense says about them, or their attitude toward me, or my self-worth; I care about how we’re going to move forward in the best way. How I deal with them and their trespass is part of how I approach a larger goal. Practice, so to speak. One more opportunity to do it right.

As I say, I lead a pretty offense-free life. I’m not saying people with bigger grievances than mine should be expected to be so blasé about them. But what I do feel justified in saying is that we don’t come closer to approaching true forgiveness by lying about what it is. And I feel justified in saying that the stuff in this meme, which is all about tension and caution and keeping score and protecting oneself against the offender, is just about the opposite of forgiveness. If that’s all there was to it, it wouldn’t be worth pursuing.

The things I’ve really forgiven people for are hard enough to spot – because by definition, they’re the ones that I don’t sit around obsessing about – without my muddying the waters with fake definitions and self-flattery. But I bet all of us have had experiences of true, freeing, relaxing and healing forgiveness. So I say, let’s give up the social pressure to award ourselves this label when it doesn’t apply, learn to identify the real thing, and accept no substitutes.