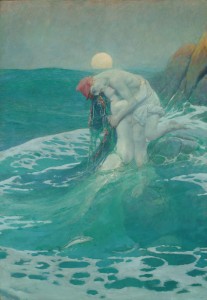 The Mermaid by Howard Pyle

The first thing that struck me on reading the summer solstice issue of Red Rose Review was the crossover cred of its authors. Several author bios mentioned awards and award nominations from mainstream fiction and publications outside the SFF genre, making me curious about the wider world of short fiction.

But on to the stories in this issue!

The narrator’s voice in Bloom by Sara Flynn caught my fancy right away. Everything about this story seemed to be stood on edge – though that may be my inexperience with selkie stories speaking! But the narration coming from a seal hunter, with all the conflicts involved, worked very well for me. The narrator downplayed the most troubling things in a way that seemed exactly right, true to life. What happened on the ice poked holes in my expectations in just the right way, and the fate of the sealskin seemed new, fresh and inevitable.

The woman in this story, however, confused me. She was interesting, but I felt as if I never caught on to what the author was trying to tell me through her, or why spring had the effect on her that it did. Is it something about seal behavior that I just don’t know?

Ken Poyner’s The Making of Mermaids was opposite in a lot of ways. The voice kept bouncing me off balance – first with unexpected word choices that I couldn’t quite figure out and then with the person using those words. Who was this woman? I kept wondering.

Fishermen’s wives, in the folk tales I know, are foils. They don’t do the growing or changing, except in their increasing demands. But this story begins with the wife anticipating transformation of her own, and indeed she seems to have already been transformed from a traditional fisherman’s wife. The way she tells her husband’s story is filled with what I can only read as theory:

I was four walls, the process of making his fish commercial, the everyday exasperation of respiration and unbroken gravity.  I kept him while he was the automaton of his own upkeep.

I wanted to know where she got this voice, because I couldn’t help reading the story as a criticism of it. She’s cold, analytic and mysterious even before entering the sea, and how is the transformation she now seeks related to that? What will it allow her to live out – her grief or her worldview? Will she escape her own voice or her circumstances?

Scander and the Red Briar Prince by Sean Robinson contained two things new to me and two that were familiar. The new things were the rivalry between cities and the nature of the monster; the old were the questing champions and what became of the loser. It felt like a familiar gem in an unfamiliar setting, and I wanted to understand the setting more clearly – until I got to the gem of the story itself, the quest, and then I was more than satisfied. The difference between the two champions came into sharp focus and fit exactly with the nature of the monster, giving the familiar aspects of the story a nice twist.

Dark-Side Dreaming by Christina Im and Frigg Mourns by Ani King also made use of the familiar. In Frigg Mourns the narrator’s voice weaves around and between the events of a well-known story, letting the reader pick it out bit by bit, like rebuilding memories. It had been a long time since I read Norse mythology, so I really enjoyed the rediscovery; and in the versions I had read, Frigg’s grief was always taken as given, so it was different and satisfying to see the story from inside her. The Frigg in this story seemed fiercer and more regal than the one I remembered. Catherine from Reign kept flashing into my mind...

Dark-Side Dreaming is a riff on Rapunzel, with some enchanting differences. The descriptions of climbing up the sky were full of childlike wonder, making me think of At the Back of the North Wind, and maintained that feel well enough for me to set aside the kind of practical considerations I am prone to like the nature of the hair, the braiding, the climbing back up after its owner had come down from the moon. The story followed the traditional plot closely enough to make me surprised by the divergences from it, and ended as it had begun with a well-sustained fairy-tale feeling.

Black Feathers, Beady Eyes by Caryn Studham Sutorus was odd-story-out in this issue, with its modern setting and time-travelling heroine. The problem she had to solve became most interesting when she failed to solve it – I always enjoy that ‘pop’ of discovering a mistaken assumption – and when she returned and discovered that there was another problem she needed to solve. The ending echoed the uncertainty in the rest of the story, where we really didn’t – couldn’t – know if things would turn out all right. I didn’t feel that I understood the crows or the altar, though, at least on the first reading – and when she didn’t remember what had gone wrong with her first attempt, I thought this was going to be an entirely different kind of story than it turned out to be!

Another group of enjoyable stories that leave me with interesting questions, as I’ve come to expect from Rose Red Review. The issue also contained poetry, which I feel completely incompetent to review. Discover it for yourself!